A live axle, sometimes called a solid axle, is a type of beam axle suspension system that uses the driveshafts that transmit power to the wheels to connect the wheels laterally so that they move together as a unit.

A live axle consists of a central differential in a single housing that also contains the driveshafts that connect the differential to the driven wheels. The differential is connected to the engine via a swinging drive shaft and a universal joint. The complete assembly may typically be suspended with leaf springs, coil springs or air bags. 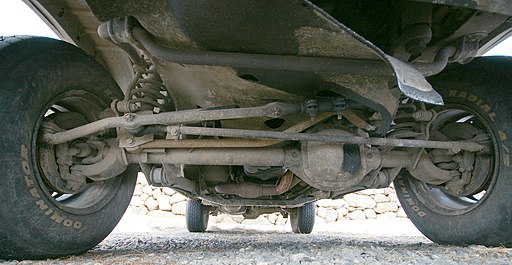 Trail braking refers to continuing to brake past the turn in point, and on into the corner.

Generally a driver will get all the braking done before turn in so that all the tires grip can be used to corner the car. Trail braking or having the foot trailing the brake pedal (coming off) as the car is turned will help the car pivot on turn in.

This is an advanced technique as it involves making the tire’s contact patch attempt to both continue slowing the car as well as turning into the corner. This makes it easier to over drive the corner, and lose time or positions in a race.

The weight-jacker is a setting somewhat akin to wedge on a stock car. The main difference is that the driver can adjust weight-jacker while on the track. There are even rumors of some drivers adjusting weight-jacker in between corners to get the most out of a lap.

Increasing weight-jacker makes the car looser. The weight-jacker goes from -15 to 15. Bear in mind that the setup keeps the last weight-jacker settings and can cause a setup to fail tech in the garage.

I try to get the car setup to where it’s a smidge free with the weight-jacker set to 0. When I leave the pits or at race start, I’ll set it to -1 to add a little push to the car for the first lap while the tires are cold.

Important to note that just 1 click of weight-jacker can have drastic effects on the amount of over/ understeer in the car. It’s a brave soul who will click it more than once at a time.

The Tire acts as a spring, with softer tires generally offering increased grip. The aim is to have somewhat even tire temperatures across the tires.

On cars that don’t have suspension adjustment, you can adjust the balance with a change in tire pressures.

For example; take a car that is pushing or under-steering out of the corner.  Lowering the front Tire Pressures and/ or raising the rear Tire Pressures, will help cure the problem.

I have some further thoughts on tire temps with regards to camber etc … more to come after further testing.

A race car typically has two master brake cylinders. One controls the front brakes and the other the rear. A dial between the two controls how much pressure goes to each.

This allows the driver to change the balance of the brakes. If the front tires are locking up too easily, you can move the balance to the rear somewhat to help.

Locking up the rears usually leads to a quick swapping of ends and the air being filled with expletives.

While a rearward bias will help you turn the car getting into the corner, too much will lead to bad things.

Usually found on oval cars such as NASCAR, using tape on the nose of the car can act somewhat as a wing by increasing the amount of bodywork hit by air on the front of the car. This is at the expense of air going through the grill and cooling the engine and brake components.

By exchanging tape for cooling, the car gets an increase in front down force which helps everywhere on the track.

While this sounds like a good deal, it is dependent on a few things. For example if it’s a really hot day, your engine is going to need that air to keep making max power, too how and it will lose power and over heat.

Rake can also be used while discussing pitch sensitivity or how the car behavior changes as the attitude / or angle of the car changes under acceleration, braking and cornering forces.

Usually found in NASCAR racing a coil bind setup has very soft springs at the front with stiff sprints in the rear of the car. This controls the pitch or rake of the chassis allowing the car to run with the front splitter close to the ground, maximizing down force.

This setup substitutes aero down force for mechanical grip that would come from stiffer front springs and tires.

The speed generated at the end of the straight pushes the nose of the car down to the coil binds to almost solid and the car is riding on the bump stops. This keep the nose of the car and the splitter low, creating aero down force and grip through the corner.

While coil binding results in faster lap times, it makes the cars more sensitive to dirty air coming off cars in front. This is seen where the cars in clean air tend to be a lot faster than those closing.

I can see a day in the not too distant future, where iRacing will have the ability for a live crew chief.

In fact I have pinged them on this recently and look forward to hearing if/ when it’s in the road map.

I love racing and enjoying getting out there in iRacing and mixing it up with folks of my level, however I can see a day where guys at the upper levels have a guy like me sitting in spectator mode making the changes to the car and strategy. Motor sport is a team sport and the sooner we can get others in on it the better.

There are already some folks who have extra spotters on TeamSpeak helping them through races.

It would also be cool to have an AI version of a Crew Chief, where you could say “The Car is 5 tight in” and have it suggest changes, once you approve, go ahead and make them. While the second part of that isn’t available until it gets put into the API, I’m working on some things that may work for the first part.

Having a program tell you things to try is easy. What’s not easy is having a computer Crew Chief running while you’re in full screen in a race.

I’ve added a Crew Chief Corner forum to discuss the role and where it could end up.